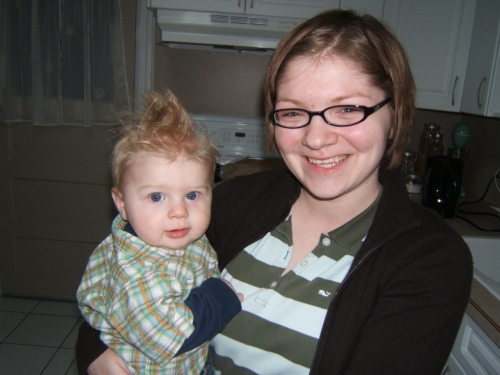 There are new photos in the gallery: a ton of them! Clay likes to be able to see the many faces of Markus while he’s at work, hence the mountain of adorable pictures.

This boy just keeps getting more and more amazing. He claps when we say, “Yay!” He gives kisses. He is pulling up to standing on everything he can get his hands on, and crawling a mile a minute. I am laughing almost all day. We are so blessed to have such a wonderful, sweet, mischievous boy!

Markus gave me quite the scare at church on Sunday. I think I’ve recovered from it well enough to talk about it now, so here goes.

Markus and I were in our usual spot, perched up in the balcony, avoiding the many offensive perfums and deodourants of the people below. The worship team was up front (Clay seated on his throne–drum throne that is) and the first song was a hymn. Now, normally we sit during the hymns because I don’t feel like juggling a squirmy baby and a hymn book, but I was feeling adventurous. Up we stood. Markus was on my right hip, the hymnal in my left hand, resting on the balcony glass. Not two lines into the song, Markus was apparently really getting into the music and slammed his hand down on my book. No, not on the side closest to me, thus sending the book falling to my feet: that kind of scenario is much too tame for my little wild one. Yes, it was the end of the book that was hanging off the glass that his hand made contact with. I wasn’t expecting the blow, and my hand slipped off of the book that ironically is filled with songs written out of peoples’ sadness and trials. (Maybe when I’m done with this post I’ll write a hymn of my own…). Anyway, I’m sure you can picture the horror that ensued. Over the balcony edge flew that ill-fated book. I peered over the edge and watched in slow motion as the book went hurtling to the unsuspecting congregation below. I could see that it was heading for a lady holding her two year old daughter. I wanted to call out, but couldn’t. SLAM! It hit the seat of their pew. She jumped. I cringed. “I’m sorry! I’m so sorry!” I mouthed. She laughed. Out of shock? Probably. But I could see that it was okay. Despite her forgiving eyes, my heart was stuck in my throat for about half an hour.

And for the closing hymn of the morning? We stayed seated.